Following up on the Wishbone Ring, my cousin asks if there was other “suffrage jewelry.” I’m sure there were lots of cloisonne pins and of course buttons, which might count as jewelry in my wardrobe. But the most prized piece was that presented to English suffragettes who had done prison time for their beliefs. It’s the one piece which did not come back from Elisabeth’s things after her death, much to my mother’s dismay.

Halloway Jail was where suffragettes were taken and where many suffered forced feeding, accomplished by pouring gruel down a tube to the stomach. Sounds awful and was. The uniform for Halloway Jail had arrows on it, much like our black and white stripes, and more recently, the orange jumpsuit. Elisabeth and Elsie McKenzie won a costume contest posing as a suffrage prisoner and her jailer, and you can see the outfit below. 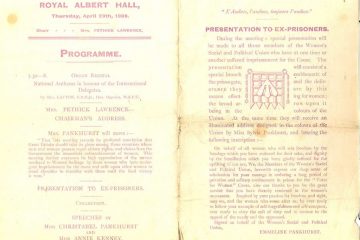 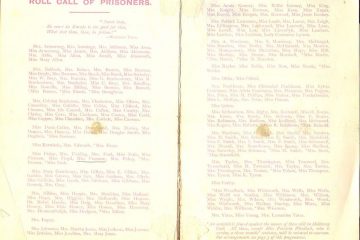 Brochure from event honoring suffragettes who went to prison for the cause. 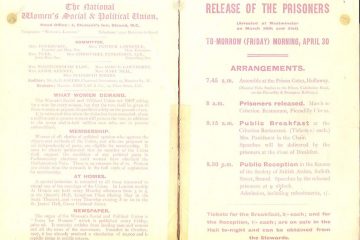 The pin awarded to ex-prisoners was a replica of the gates of Halloway Jail and it was made of plain metal, no silver or gold here. The awards ceremony was a big affair and the roll call of prisoners was read out and each person received her pin. It was worn as a badge of honor. When a particularly prominent suffragette was released, a delegation would meet her and have a parade as with Miss Phillips, a Scottish leader (pictured). You can see the martyrdom in her face. Or hunger and exhaustion or all of those. But there is no doubt that the militant Women’s Social and Political Union, founded by the Pankhursts, inspired a kind of religious ecstasy in its followers. From reading Elisabeth’s accounts, she felt that way and being dedicated to this higher cause gave purpose to thousands of women on both sides of the Atlantic.

My friend Terry gave me a replica from a museum somewhere and I have been known to wear it to suffrage affairs. (see pic).

Images and accounts of Suffrage Jewelry 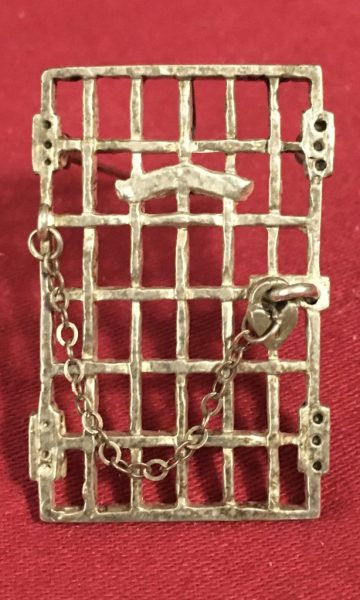 Replica of pin given to suffragette ex-prisoners of Halloway Jail.

Parade on the release of Miss Phillips, leader of the Scottish suffragists. Mrs. Pankhurst is on the left, next to her, holding the rope. 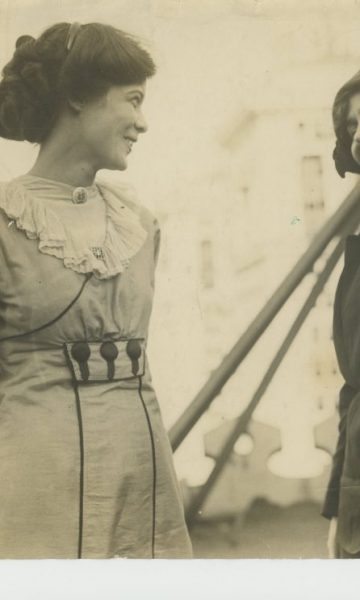 Both Elisabeth Freeman and Mary Keegan are wearing their "badge of honor" signifying prison time on behalf of English suffrage movement. Picture taken on top of Tribune Bldg. 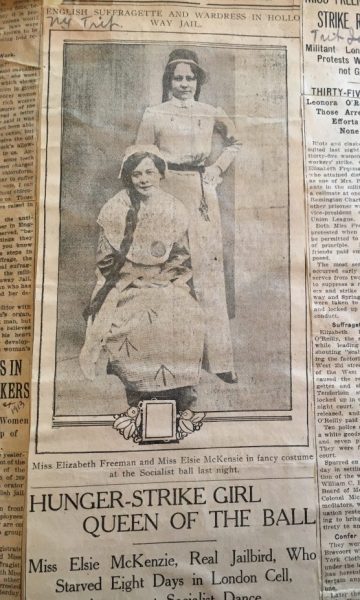 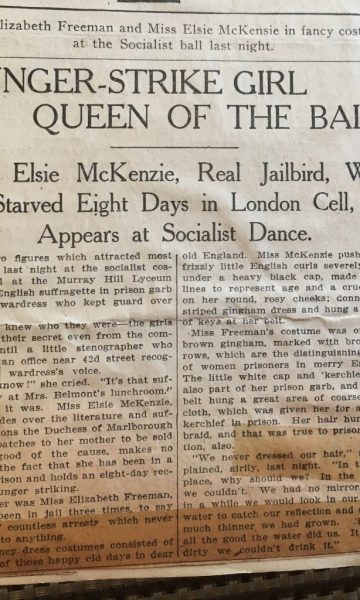 The Wishbone Ring The Privilege of History