Elisabeth lived with her mother at 269 W. 12th St. in NYC where her mother functioned as the superintendent of the building, presumably in exchange for rent. Mary Hall Freeman supported Elisabeth’s suffrage work extensively and kept her scrapbook for her. She died in the mid 1920’s.

Jane Freeman became a noted painter specializing in portraits, and lived in a studio above Carnegie Hall, curated the gallery there, and also had a summer cottage in Rockport MA. She received many awards and honors in NY and Europe; her work was featured on the cover of Literary Digest and in other publications. (Read more about Jane.)

John Francis Freeman became a typesetter with many NY newspapers including the Brooklyn Eagle, the Ithaca Journal, The Binghamton Press and the Binghamton Sun. He was a leader in the printer’s union. John had two children, Fred and Francis, with his first wife, Mary Ellen Cavanaugh, and after she died he married Blanche Bishop of Binghamton. The family lived in Northern New Jersey, Port Washington, and Binghamton alternately, and had five children, Jeannette (“Netty”, later married to Walter T. Wittman of Paramus NJ, with two children Jane [later VandeBogart] and Carl Peter; Ruth (later married to Robert C. Johnston, with three children, William F., John H. and Margaret R.); John (later married to Pearl Richardson, living in Chicago, then marrying Kathleen ? with whom he had a son, also John); Helen (later married to Charles Shipley, settling in Tempe AZ with 3 children, Lynn, Jan, and Danny); and Elizabeth who became head guidance counselor at Paramus High School. Mary Hall Freeman supported Elisabeth’s suffrage work extensively and kept her scrapbook for her. She died in the mid 1920’s. 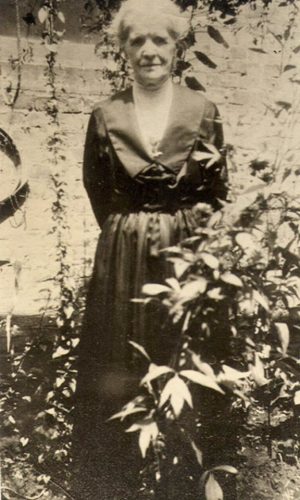 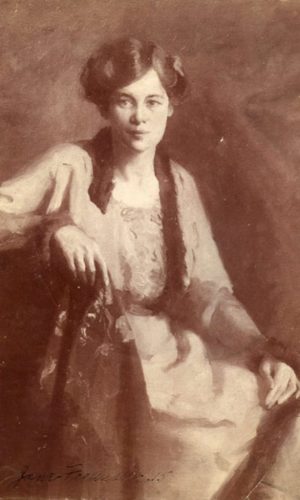 Portrait of Elisabeth Freeman by her sister Jane Freeman 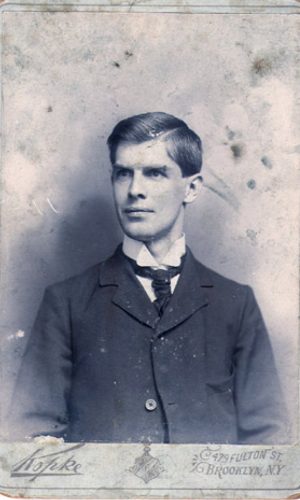 The elusive father of Elisabeth has been found! Genealogically speaking. For the longest time it was a mystery what his name was, why his wife and kids separated from him, and who his people were. My parents traveled to England and consulted records there, pre-internet, but they were assuming his name was John Francis like […]

END_OF_DOCUMENT_TOKEN_TO_BE_REPLACED

Who doesn’t love playing dress up? Well, me for one, but not so our heroine Elisabeth Freeman. She loved fancy dresses and used her fashion sense to draw attention to her cause. Take the “Pilgrim’s Hike” from NY to DC in February 1911 to join the Women’s March the day before Woodrow Wilson’s Inaugural. (Talk […]

END_OF_DOCUMENT_TOKEN_TO_BE_REPLACED

A side line of Elisabeth’s–and every freelance activist needs a second gig–was selling antiques. When she was on the road, she carried some watches to sell. One specialty was seriously old pocket watches (the size of a baseball), and also creating rings out of the ornate watch cocks from fancy watches. Elisabeth had a store* […]

END_OF_DOCUMENT_TOKEN_TO_BE_REPLACED

This blog topic comes to me by way of Tom Dublin, Binghamton University Professor Emeritus of Women’s History and sharer extraordinaire. I may have mentioned that researchers in this field are incredibly generous when they find mention of Elisabeth Freeman, and none more so than Tom, who also co-authored an article with me in an […]