Peg Johnston 1920-1942 Out of the Limelight Provincetown, The Advocate

A recent trip to Provincetown revealed some new information about Elisabeth Freeman’s “retirement” occupation, an antiques store on Commercial St. For one thing I had the wrong building; matching up pictures of the store with existing establishments was off. A check in the archives of the town’s newspaper, The Advocate, put the address as 407 Commercial St. not our favorite Kitchen store up the street. 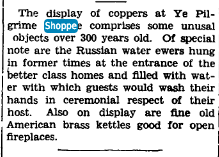 Apparently, she started the business in 1924, considerably sooner than I had thought. She summered in Provincetown for 12 years, leaving for her final destination of Altadena, California in 1936. Lucky for historians, the newspaper of that period carried lots of gossip–who was visiting, comings and goings.

We also know that her sister Jane, the noted portrait artist, spent some time in Provincetown before moving on to a permanent home in Rockport, just up the coast north of Boston. Rockport was another artists’ colony with an arts association and market for art.

Provincetown in those years was bustling with creativity and energy of a new generation. She must have run into or attended one of the plays by the Provincetown Players, a group of playwrights, actors and theater people who fled NYC in the summer and tried out new ideas in the freedom of a bohemian crowd. The Beachcombers Ball was certainly an event she attended since we have pictures of her wearing a dramatic gown passed down from her Aunt Sally.

Innovation in the arts–theater, visual arts, poetry–took root in Provincetown with such luminaries as Henry Hensche, Eugene O’Neill, Mary Heaton Vorse, Susan Glaspell, Hans Hofmann, Edward Hopper, among many more. Elisabeth surely engaged with the summer theatre of the Provincetown Players–it would have been right up her alley. And there even some political controversies: A Community Center was established in 1933 which opponents called  “communistic.” And even a tragedy had political overtones: In 1927 a Coast Guard struck a submarine and sunk. The towns people could hear the sailors knock on the side of the submarine and tried to find a way to pull it to the surface but the Coast Guard did nothing, according to stories Elisabeth told to my mother. She was outraged by the injustice of it all.