Freeman on Strategic Use of Wagons

I participated in a zoom presentation sponsored by the Historical Society of Woodstock. on Sat. Oct. 1oth called “Standing on Their Shoulders: 100 Years of Voting and Still Marching for Women’s Rights.”  Elisabeth and Edna Kearns were the shoulders in this case and they both traveled about in horse drawn wagons to draw attention to the cause of Women’s Suffrage.  Here’s what I presented to illustrate the strategy of using wagon in suffrage outreach.

For some quick background, Freeman worked in England with the Pankhursts and their radical suffrage organization, and in 1911 returned to the US. The suffrage movement in the US was basically dying of boredom and needed what we would call a “re-branding.” EF and several other British trained “suffragettes” were ready.  However it must be noted that in England it was the government leaders that were against suffrage for women, not the people. In the US, the general population of voters were just not educated about suffrage. As Elisabeth stated clearly, “The newspapers look for news and such tactics produce news.”

One of the first treks for EF was traveling around Long Island where Rosalie Jones, heiress and dedicated suffragist, lived. EF was good at the stump speech and Rosalie articulated the strategy: “The purpose of the campaign is to rouse women of small towns to their responsibility for suffrage.” She continued, “We can never win if everybody depends on New York City for its speakers.” (“Once Walked for Cause, Now She’ll Teach It” Tribune, Nov 19, 1914)They got a lot of press coverage in small local papers as well as regional papers.

Their next gig was in Ohio where there was a ballot initiative opposed by liquor interests. They traveled to rural areas and talked to individuals and entered small towns in the afternoon and, by the evening, had a speaking engagement or rally. EF spoke at a state fair about suffrage; she spoke during intermission at the movies as well as on street corners. Most men said, as in this cartoon, “I dunno. Haven’t made up my mind.” But, the farmer gave them apples!

And in town after town the local paper gave them coverage for the novelty of it as much as the politics. Frequently, the horse, in this clipping named “Asquith” after the recalcitrant British Prime 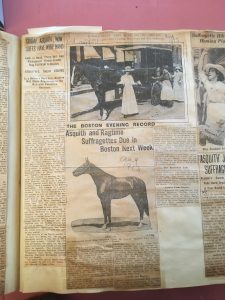 Minister, was the main story.

The Ohio campaign, which they lost, led up to the most famous of hikes or “Pilgrim Marches” from NY to Washington DC in time for the Suffrage Parade designed to upstage Woodrow Wilson’s Inaugural. EF drove the literature wagon and gave speeches at each stop. They walked from NY to DC in February through snow, ice, and mud but got tons of publicity and even had embedded reporters. Full page spreads were not unusual and the NY papers followed their progress daily.

The press recorded their disappointment at their arrival where March organizers “forgot” to meet them. Still, crowds cheered them on (and others got quite hostile), resulting in more coverage. 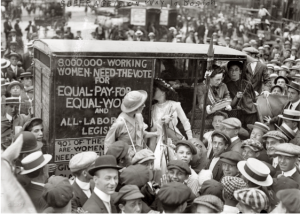 In most cases, the wagon itself was a moveable billboard. In Springfield MA, town ordinances prohibited such advertising and the wagon had to veil its messaging. They said, “…and though our wagon was veiled, I guess Hartford  will remember the suffs. We sold lots of Woman’s Journals.” (8-19-1913). The NY to Boston trip in Summer of 1913 included a hurdy gurdy music machine to draw a crowd. They also had a stunt of sending carrier pigeons which the press loved.

In Sullivan Co, in 1914, they used oxen to draw their wagon. Mrs. Muller a local organizer said, “It’s high time that the rural districts were awakened to the movement. Some them have never even heard of suffrage.” (Campaigning with an Ox Team, The Eagle July 20, 1914). Here is another Sullivan Co photo of a wagon which might have been part of a float gaily decorated to attract attention.

EF, and her fellow suffragettes, set out to connect to people and to be newsworthy, or as Elisabeth put it, “My goal is to be the topic of conversation at the dinner table.” Rosalie Jones observed, ” (The hike) has awakened many a woman and man…to realize that suffrage is not something you read about, but something that goes walking past your own door.” (The Sunday Evening Times, Feb 16, 2013) It took courage to step outside the bounds of what was expected of women and to make a spectacle of themselves. But they knew that would make an impression and would expand what women could do, and would definitely, get good press.

The Vote The Wishbone Ring