On Board the Women’s Hughes Campaign Train, 1916

Imagine, if you can, a cross-country–both ways– train trip with a bunch of elite women, stopping several times a day to campaign for the Republican presidential candidate.

OK, you probably can’t imagine because it was 1916 and the Republicans were the “good guys” in favor of women’s suffrage and modest progressive values. (The Party of Lincoln and all that…) But by the time you got to Chicago you might be well sick of the likes of Mrs. Cornelius Vanderbilt or Mrs. Nelson O’Shaughnessy dripping with jewels and too many miles to go before a rest.

But then, you pull up to Miles City, Montana, which would not have been on my politically important towns, and you hear: “Yip! Yow! Bang! Hurrah! BANG! BANG!” and over 100 cowboys and cowgirls greeting you. According to Rheta Childe Dorr, an embedded reporter on the Hughes Campaign Train, “Astonished, and a little alarmed, we piled out into the sparkling sunshine to be met by a howling, leaping mob of cowboys and cowgirls, really and truly trappers and guides, miners and ranchmen, and a band dressed in flannel shirts, chaps and sombreros.”

She continued that the locals “took kindly to speeches” made by “Dr. (Katherine) Davis, Mrs. Raymond Brown, Elisabeth Freeman, Miss Annie Peck, Mrs. William Curtis Demarest, Mrs. Edith Ellicott Smith and others…The cowboys kept their ponies as quiet as possible on the edge of the crowd, and listened closely, applauding each speaker by waving their hats and yelling. The meeting lasted an hour and a half and nobody left before the close.”

Then came the entertainment: a cowpuncher cabaret “of some of the finest riding of unbroken horses, exhibition of bucking broncos and riding of wild steers that the boys could muster. Denver Sherman, champion steer rider did his best stunt, riding a steer sitting backward with his legs wound around the animal’s neck. The steer was a plucky one and galloped with his tail stiffly in the air, bellowing his state of mind.” 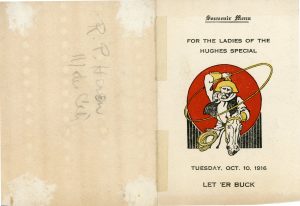 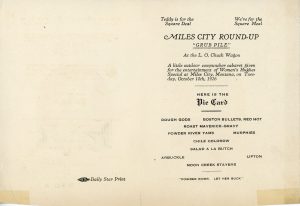 And food from the L-O chuck wagon, served up by “old Butch, a grizzled veteran of the plains (who) has run chuck wagons for thirty years. His biscuits are light as feathers, his ‘roast maverick and gravy’ are worth going to Montana to eat and his chile colorow, stewed corn and red peppers, is incomparable.” (see menu)

Another embedded reporter picks up the story, “The women had not been in the city half an hour when one of the most attractive of the fair campaigners, Mrs. Eula Harris…received a proposal of marriage from one of the most picturesque of the cowboy group. Mrs. Harris is a striking young widow, with masses of golden hair. Corda M. Houghlan, who holds the world’s lasso record, decided when he saw Mrs. Harris that he wanted her for his wife. ‘I can’t read and I can’t write’, admitted the tall, swarthy skinned bronco buster, ‘But I can work and I can love.’”

Miriam Teichner, yet another embedded reporter, wrote: “Miles City, Mont has robbed the Woman’s Campaign Train of its heart. Not, you understand, of its campaigning heart. That is as sturdy and staunch as ever. But of its personal, really and truly heart, the campaign train has of a certainty been robbed, robbed so indubitably that when at 1:30 yesterday afternoon, it climbed back into its Pullman home, it lifted up its collective voice and wailed in collective anguish: ‘I’ve never had such a wonderful time in my life. I’m coming to Miles City to live.’”

“We want to take you back home with us!” cried Miss Elizabeth Freeman as the campaigner shouted goodbye. “We don’t want to go. You can’t vote!” the company of mounted ballot victors replied. (Remember, in some of the Western states women won the right to vote before the rest of the country, especially in sparsely populated states like Montana.)

Now here’s another little twist on history: EF received a post card in November from the lovesick apparently illiterate Corda Houghlan, who must have taken a crash course in literacy: “I rec’ed your card a few days ago and will (send) another. I intend to make your city a visit about Jan. Bob, my pal will be with me I think would like very much to ‘C’ you. Please drop me a line, Bye, Corda.” The pal may be Bob Harmon who writes in a separate postcard Dec. 11, 1916, “Read your card saying that those pictures were taken at the Fair Grounds were good would you please send me one. This picture was taken at the Farre (?) place last year, As a friend, Bob Harmon c/o H+H Ranch.” 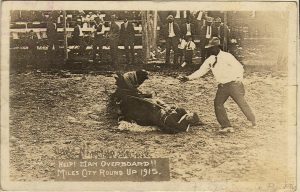 I love these little details of human interest, as did readers of the daily posts of all of these embedded reporters. Really, how smart to bring your own reporter with you! We may have a sense these days that reporters should be objective and maybe part of the press pool that travels with the candidate but not necessarily partisan. We are probably fooling ourselves, but in those days papers were avowedly political which is why there were often competing papers in a town. Binghamton’s own millionaire Willie Sharpe Kilmer didn’t like the coverage he was getting from the Sun-Bulletin so he started the Binghamton Press. In going through this scrapbook you can tell the partisan coverage when reporting that a bunch of Democratic rowdies roughed up the “Hughesettes” as they were called or taunted the whole campaign train as the “Golden Special” because of all the wealthy women on board.

The Women’s Campaign Special was a great stunt, the brainchild of Frances Kellor who was to go on to be the first female Cabinet member under FDR. It was the first time that suffragists campaigned for a party candidate instead of for the cause of votes for women. The fear among anti-suffrage politicians was that women would change the balance of power with their votes. As it happened, most women voted the same way their families voted and women’s votes, or as we say, “the gender gap” was not significant in elections until recently.

Personally, I am hoping it’s wide enough to pull us back from the abyss of Republican backlash that is endangering women, and indeed, Mother Earth. Please, register to vote, and then VOTE. Look at how hard women worked to make it happen, not withstanding a pleasant time in Miles City MT in 1916.

EF in the Talkies Dress Up
Back To Top